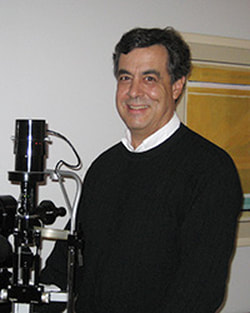 Dr. Monteleone has been an associate of our office for nearly 25 years.

He did his undergraduate studies at Syracuse University and graduated from Southern California College of Optometry in 1979. He has worked with MD's and OD's and maintains his own practice in LaPalma.

He resides in Orange with his wife, daughter and son (twins). He enjoys spending time with his family and is actively involved with Hockey and Soccer in his community.

Dr. Evan Thomas has practiced optometry in Newport Beach since 1968, when he became an associate of Doctors Richard Button and Charles Crone in a medical eye practice. He has been in private practice since 1985 at our present location.

Dr.Thomas provides general and therapeutic eyecare with an emphasis on contact lens fitting.

He is a fellow in the American Academy of Optometry and a diplomat in it's Section on Cornea and Contact Lenses.